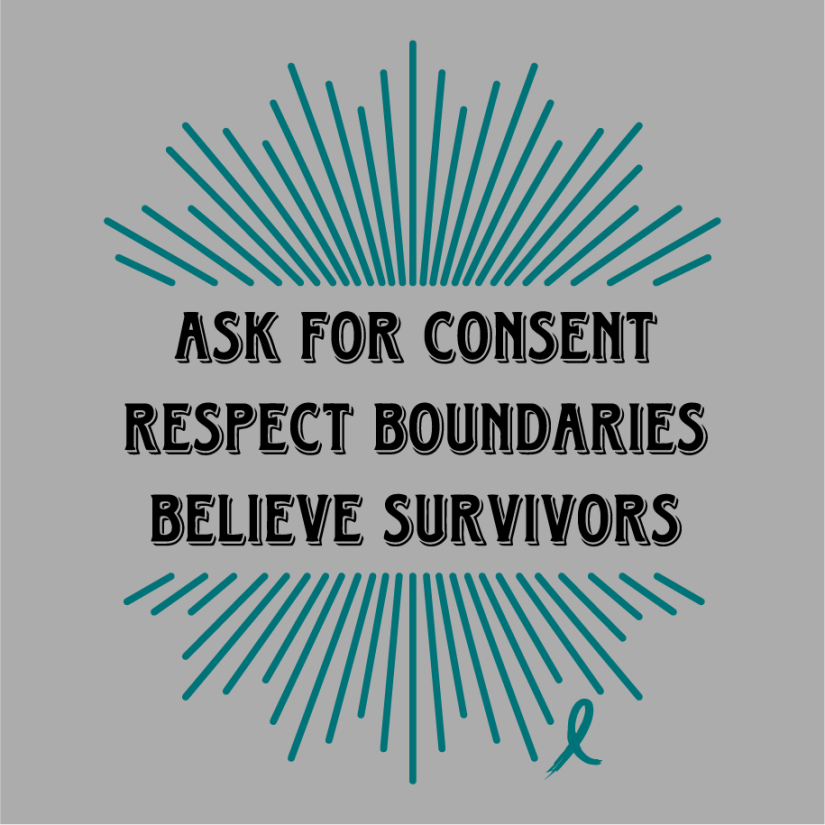 I’m back to talk about consent, boundaries and believing survivors. I will keep talking about this because there are still so many people that are quick to judge survivors for coming forward. These people are so quick to judge for one of two reasons, perhaps both apply.

Reason one: They have been fortunate to have never experienced any form of sexual abuse, sexual harassment, sexual misconduct, molested, raped. Reason two: They support an abuser, sexual predator or they are a sexual predator which makes me think we should pay particular attention to those that bash victims.

I will point out that those sexual predators that are convicted of rape/sexual abuse are housed together in prison, away from the general population for THEIR protection.  Why do you think that is? Even murderers, members of gangs and the rest of those in Gen Pop find rapists disgusting, less than human scumbags. I’ll let that sink in. This is not my opinion, this is a FACT.

I know what’s coming next, Where’s your proof, Hannah? How can you say such things without proof? This is exactly what I’ve had to deal with in a recent twitter war when I made the statement that sexual predators stick together/protect each other in a tweet that mentioned Trump was in full support of Kavanaugh. I also made the comparison that this type of behavior is how the churches have been able to get away with abusing so many kids, they protect each other, turn a blind eye and cover it up.

The twitter poster and I exchanged six or seven comments each, to which he (I assume it was a he I was dealing with) kept insisting that I show “PROOF.” Honestly, it was like having a conversation with a toddler that keeps asking Why.  First of all, I don’t need proof to form an opinion, I know that won’t sit well with some of you, but hear me out. Opinions are NOT based on facts, opinions are personal preferences much like trying to agree on pizza toppings. No one is right or wrong, it’s based on preference or in the case of pizza, a matter of taste.

If I had come out with “I KNOW FOR A FACT THAT TRUMP IS A SEXUAL PREDATOR,” then yes I better cite my sources and have proof to back it up. My opinions are based on interviews Trump has given, statements he has made on the record and as a person that has endured several accounts of sexual abuse and sexual harassment, I recognize certain behaviors/phrases that are common with sexual predators. That is why I feel strongly that Trump is a sexual predator. I will not apologize, I will not retract my statement. Trump supporters lose their minds when their orange idol has something not so nice being said about him. Honestly, he does that to himself.

If you’re a regular follower of this blog, then you have a good idea as to the many reasons why victims don’t come forward right away. There are people that still don’t grasp those reasons and think the sole reason that some of us come forward many years later is for a big payout.

Let me make this as clear as possible… Those of us that have been sexually assaulted, sexually abused, raped or molested feel too ashamed, too embarrassed, too scared to admit that we had been taken advantage of, that we had been violated. We don’t want to call attention to ourselves knowing how we will be judged and made to feel after we do share our experience. Society has made sure to shame us, make us think that we are crazy, try to convince us that we are not remembering the event correctly.

It’s ironic, the fact that there is so much pressure and emphasis to have a witness, to which there rarely is a witness, yet somehow those who don’t know us, they weren’t there seem to have an opinion as to how things went down. THIS IS A PROBLEM!!!!!

Countless survivors have come forward, we speak up which takes a great deal of courage, WE WERE THERE, yet we are not believed, we are made to relive our trauma over, and over, and over. Believe me when I say that when we do come forward, we are not doing it for the fame and fortune. We come forward when we are ready. We come forward when we see an abuser looking to gain a position of power, and we feel it is our civic duty to come forward with information that should help keep them from gaining that advantage. You’re welcome… None of us are thanked for coming forward. Instead, we are met with disbelief and instant accusations of being gold diggers. Some of us will never come forward, and that’s okay too. Our actions to come forward are not an act of seeking revenge, but more about trying to prevent our abuser to continue abusing others or making laws that take away our rights.

I see that I’ve gone off topic slightly…

I realize that the concept of consent is confusing for many people, so I’ll do my best to clear that up. Consent, as it applies to engaging in sexual activities, means that both partners agree that it is okay to keep going. Getting consent is the equivalent of getting a YES or a similar phrase that lets you know that your partner is on board, you have permission.

Where this gets muddled is when a couple starts off with consent and one partner changes their mind (for whatever reason) and they say NO, STOP,  I’m NOT READY or any phrase/action like pulling away that is a clear indicator to STOP WHAT YOU ARE DOING. If you are on the receiving end of a NO, this is not personal and is not a reflection of you in any way. Respect that NO means NO. If you love your partner and truly care and respect them, you will stop and acknowledge their boundaries. If you insist on continuing what you’ve started, now forcing your partner to continue against their free will, you have crossed a line that you can not come back from. You are a rapist.

What about teenagers that are experimenting? NO means NO.

What about a married couple, there’s got to be an exception made for that, right? No exception here. Your spouse doesn’t owe you anything. Being married doesn’t give you a free pass to have your way with them. This is known as Domestic Sexual Abuse and NO still means NO. If you find yourself in this position, your spouse is not respecting your boundaries and continues to treat you as their personal sex slave, GET OUT of that marriage if counseling doesn’t work and the marriage is not salvageable.

I have endured this type of abuse as well, it is very real and often is not viewed as rape, when it is exactly rape. Your spouse should want to engage willingly, not made to lay there and take it because they owe you or you feel it falls under the “for better or for worse” section of your vows. Find another way to get out your pent up frustration/aggression and leave your spouse alone. Learn to accept the phrase “Not Tonight, or Not Now” as NO.

A person that truly loves you and respects you will not take advantage of you or make you feel like shit for saying NO.

What about casual sex? Casual sex is perfectly fine as long as consent is freely given by both parties. Agree on a safe word if that helps to establish a level of comfort and honor that.

How can I avoid being accused of rape? Don’t force yourself in a sexual manner on someone else. Don’t continue any sexual activity when your partner says NO, Stop, pulls away, changes their mind in the middle of what is happening. If your partner breaks down in tears, shows signs of being scared or nervous, respect their boundaries. Don’t give in to peer pressure or to the idea that all of the cool kids are doing it, so should you.

Don’t drug your partner (or potential partner). Don’t take advantage of a person while they are intoxicated, even if they appear to be of sound mind at that time. Don’t go in for a sneak attack and catch another person off guard by putting your hands on them and touching/groping/fondling them. That is not appropriate and unacceptable behavior, and chances are, you did not get consent to do so. I shouldn’t have to say this, but I will. KIDS ARE ALWAYS OFF LIMITS. The short answer is, if you don’t want to be accused of rape, then don’t be a rapist.

Rape is not a result of what the female was wearing. Rape is not the result of a woman jogging alone, minding her business as she tries to stay fit.  I actually read a comment from a guy that claimed that if you don’t want to get raped, avoid being alone with a man. What the actual HELL!!!! It’s statements like this that make me think this guy is a rapist. Similar statements have been made by the president of the USA. So what, women now and forever need to use a buddy system and all men are not to be trusted to keep their hands to themselves? That is the message he is sending on the post he started about why he doesn’t believe survivors.

The act of rape is not accidental, it is done with intent. I will not budge on that statement.

Our sex drives are not equal, not all humans crave sexual interaction 24/7? While yes, males tend to have a higher sex drive and tend to crave it more often. Just as there are many women that have the same urges/needs. Some of us have a sex drive that is somewhere in the middle, and some of us are content with having less sexual interactions. All of which are normal by the way, so don’t let someone make you feel that you are inadequate in any way.

If you find that you do crave sexual interaction frequently to the point where your day is often disrupted, please consider seeking help as you may have an addiction. I’m not judging or shaming, just pointing out that it is a possibility.

This is not a male bashing post. I recognize that boys/men are also victims and come forward less often than females do, and that’s okay. Sometimes it only takes one survivor to come forward to make a difference. Sometimes the courage of that one survivor will encourage other survivors to come forward. Think about that next time a highly influential person is accused of rape, and several victims come forward to stand together for support as they seek justice. Not having the courage to be in the public stoplight and having their name in headlines is not an indicator that they were not sexually assaulted. Acknowledge the fact that they came forward as proof against their abuser.

Learn to RESPECT Boundaries, Learn to RESPECT yourself, Give CONSENT freely, Get CONSENT, any sign of hesitation from you or your partner is an automatic NO. You don’t owe anybody anything nor should anyone feel that they are owed.

Otherwise, I have to assume that you support sexual predators and you are part of the problem.

New author, returning blogger, artist, survivor, and peer mediator. Using my voice for those that can't speak for themselves. I have many creative interests, cruising and learning new things. View all posts by reinbeckstudio